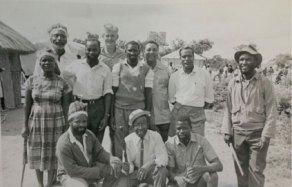 Mr. Phiri (far right) with fellow detainees in Gonakudzingwa Restriction Camp in March 1965, on the visit of Garfield Todd (at back). This is a rare photo recently uncovered in the Church of Christ Archives in New Zealand.

The Phiri Award for Food and Farm Innovators Trust is a registered Trust in Zimbabwe created in 2014, and chaired by Dr. Mandivambi Rukuni with a Board representing leading Zimbabwean institutions in this field. The Mission of the Trust is to honor and advance the work of indigenous innovators in the farming and food sectors. The centerpiece of this work is an annual award.

Named for Zephaniah Phiri (1927-2015), (CV here), the renowned water harvester and ecological farmer from Zvishavane District whose innovations in vlei farming over a fifty year period earned him first arrest and then national and international recognition, the Phiri Award for Farm and Food Innovators will open a new chapter in advancing indigenous innovation and food sovereignty in Zimbabwe. To know Mr. Phiri is encounter the genius of love for creation in a man who spent years in detention and under torture. Please enjoy this short film that Obrian Mudyiwenyama and Moses Ndhlovu have created with Friends of Muonde support for the 2014 Award. 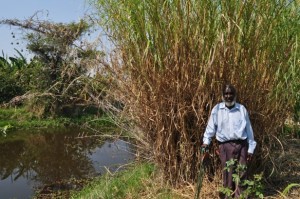 VaPhiri at the oldest of his three fish dams

The first Award was given in October 2014 and the second in March 2016, with support from Friends of Muonde and others, and given initial success the Trust has vowed to continue, now with a part time but seasoned coordinator, Marcus Hakutangwi, who can be reached at marcus.hakutangwi@gmail.com. The Trust hopes to work with the innovators we recognize and their potential development partners to spread their good ideas to other communities and the world. 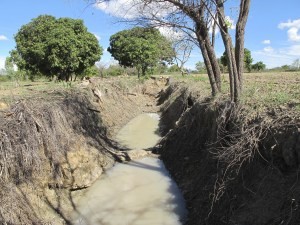 Just as Mr. Phiri discovered new ways to produce food abundantly and sustainably through detailed study and active management of the soils and hydrology of his land so too are other dedicated Zimbabwean farmers making quiet breakthroughs that advance food sovereignty in their communities. Just as Mr. Phiri shared his innovations with thousands of visitors from across the country, Africa and the world, so too can other local innovators be recognized and assisted to disseminate their vision. Just as Mr. Phiri’s innovations—such as water infiltration pits in contour ridges and clay-lined ponds in vleis—are now adopted by tens of thousands of dryland farmers so too can other innovations not yet recognized contribute nationally to the advance of agro-ecological approaches to sustainable food systems.

Increasing recognition for local innovation and the creative capacity of food producers to solve deep problems and find new opportunities can help advance a partnership approach to agricultural development in which all knowledge is valued. And it can sustain with dignity the necessarily central place of the women and men who meet the food needs of their communities and the country. The Phiri Award was conceived in 2010 at the ceremony at the University of Zimbabwe where Mr. Phiri received his Lifetime Achievement Award. You can find a description of his achievements as presented at this ceremony here and a collection of hundreds of pages of materials by and about Mr. Phiri assembled in Mr. Phiri’s Book of Life by Dr. K.B. Wilson.